Skip to primary content
The announcement of book-sale at my university has kept me so excited of getting another book to read on. As a non-fiction book lover, I used to enjoy reading book that educates and exposes me to new cultures especially stories that revolves the lives of Middle-Eastern society. It makes you feel you are physically there, transporting your soul to their society and make you live their life! So, while I was browsing through the stacks of books, I found Three Cups of Tea. And I was able to quickly remember the book as it was one of the books I have seen before. With a glance through the summary at the back of the book, I decided to have it home.
I have read many stories from Middle East, but this one particularly is a proof for how kindness without prejudice and discrimination succeeded in winning the heart of villagers from different culture all together. If you are someone who can appreciate a book and it’s story without caring much about the style of writing and some crap book reviews you may find over the internet, then this book is WORTH a read!! I’ll tell you why!! 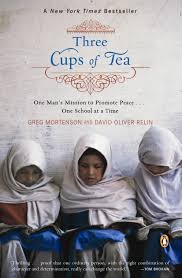 1. Education: Empowering Women, The Architecture of A Society

What happens in this book is basically, Greg Mortenson, a mountaineer who was helped by mountain villagers in Pakistan. In return, he made a promise to build schools for them to eradicate poverty and improving education level of their children. Greg believes that educating women is as important as educating the boys as educated women will be able to lift the society’s status and shape the mind of the young ones. The villagers, who are Muslims, were convinced with his effort and started to enrol their girls to schools. I was astonished with the fact that one man with a will to bring about changes has out-powered the ability of a country’s government. The responsibility to educate children lies solely on the government of a country and that’s where all the funding and effort should come from. But, beyond that, Greg has inspired lives of many young girls with the opportunity to have a balanced education. Educating girls changes the world.

We all are well aware of the issues between the West and the Middle-East. While the social stigma of  the West and the Middle East hating each other still strongly prevails, Greg has proven that the act of kindness to people from any society will win the hatred and prejudice that marred their vision towards the goodness in people of other race. Greg was strongly opposed by some of his fellow countrymen when the World Trade Center was attacked, viewing his aid to people in Pakistan as an act of betrayal to his country whereas some of them do realise the importance of educating people in Pakistan which will lead to change of perception towards the West. It was also beautifully portrayed in the book how Muslims were also against terrorism and judging a society based on some of its people is truly atrocious.

Keeping one’s word to do a small favour is fine. But building schools for a society without funding, that’s WOW! I think, little would the people of Korphe expected that Greg would finally return to make schools for their children. Many mountaineers would have came and left Korphe with empty promises but the act of a man living up to his word is really inspiring and on top of that, how the schools have changed the lives of girls are magnificent and an eye-opening story!!
Of all the things we can do for women, empowering them with education tops them all as that’s the weapon against gender discrimination.